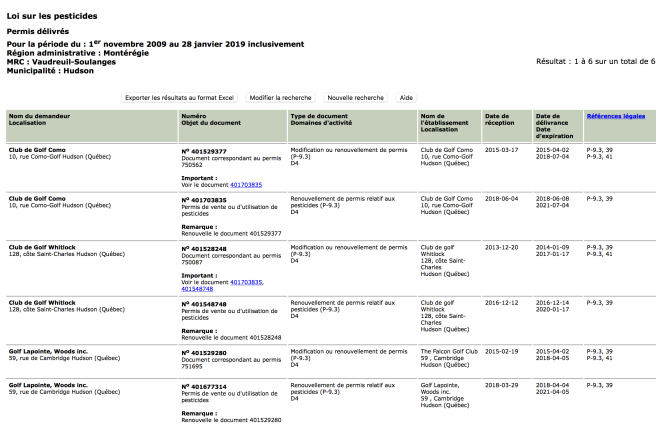 When did statistics on golf course pesticide use become unavailable?

Was it before or after Quebec agronomist Louis Robert was fired for blowing the whistle on the chemical industry’s role in financing and vetting pesticide risk studies?

On Jan. 28, I captured the above screen shot of a page on the MELCC website.

On Feb. 27, almost exactly a month later, I tried to replicate the same screen capture. Below is the result.

An MELCC spokesperson told me to file an Access to Information request since this information is not publicly available.

Since when, I asked him.

They have never been public, he told me.

So what happened to the live buttons shown on the Jan. 28 Before shot?

As of next Wednesday, March 6, changes to Quebec’s pesticide law will ban the domestic and commercial use of neonicotinoids, a group of pesticides linked to declining bee populations, but with two controversial exceptions — golf courses and cropseed producers.

Quebec’s not-so-blanket neonic ban covers imidacloprid, the world’s most widely used insecticide and its iterations: acetamiprid, clothianidin, imidacloprid, nitenpyram, nithiazine, thiacloprid and thiamethoxam. All are prohibited throughout the European Union and in other countries as well as in several U.S. states because of a growing body of research-based concerns about harmful effects on mammals and birds.

Because they are water-soluble and slow to degrade, there are concerns that neonics used on arable land are percolating into the aquifer and concentrating there at growing levels, thereby building up in the food chain.

Quebec has led Canadian action on banning neonics. Quebec was first to enact pesticide controls, thanks to people like Hudson’s Dr. June Irwin. In December 2015, Montreal banned all neonicotinoids – without exception – on all properties within the city limits, including the Botanical Garden, all agricultural areas and all golf courses, drawing pushback from the chemical industry and agribusiness.

Under existing regulations, golf courses are required to submit annual reports on pesticide use and make them available to municipalities as well as to the environment ministry. The aim was to encourage golf courses to strive for year-over-year reductions in their use of insecticides, herbicides and fungicides in exchange for the privilege of continuing their unregulated use.

There is some evidence suggesting that not only has the golf industry been unable to reduce pesticide use, but climate change and golfers’ demand for perfect greens and fairways have pushed courses to use more instead of less.

The Ministry of the Environment and the Fight against Climate Change (MELCC) offers no explanation for the the policy shift. Instead, the MELCC pesticides page promises tighter controls and increased supervision for the rest of us.

— As of March 8 2019, ban the retail sale and professional application of neonics for use on grass in urban areas — except on golf courses.

— Places further controls on the sale of mixed pesticides for domestic use;

— Permits the injection of pesticides to control Emerald Ash Borer near daycares and schools.

— Permits the domestic use of pesticides containing D-phenothrine and tetramethrine against wasps, hornets and bees near daycares and schools.

— Neonics, long used to coat seeds so they don’t get eaten before they sprout, are approved for use on oats, barley, wheat, soybeans, canola, feed, seed and table corn — but are subject to stricter storage and usage controls.

— Neonic retail sales will be subject to a tighter permit system to ensure they are not sold for cosmetic use. For example, retail transactions will now require signed authorization from a licenced agronomist.

— Existing regulations regarding wetland and watercourse protection and overspray prevention will be applied with greater rigour.

— Permits will now be required for fumigation with sulfuryl fluoride, magnesium phosphate;

— Railways and other transport corridors will no longer be required to remit the Ministry a report on pesicide application;

— All commercial pesticide purchases, sales and applications must be recorded on forms for that purpose; the registry no longer wants to see invoices or purchase orders.

One thought on “Fore!”