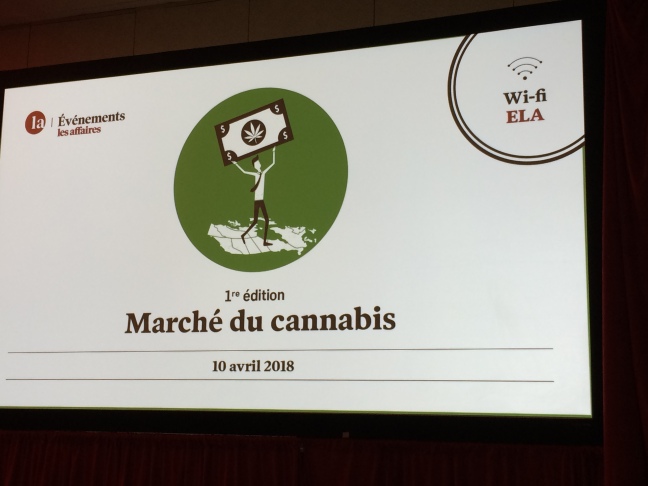 What’s happening with the Liberal promise to legalize the recreational use of marijuana by this July? When will edibles be legal? What’s the story on pot-impaired driving? To find the answers and to see where this budding industry is at, I attended the April 10 Marché du cannabis, a day-long Les Affaires symposium on Canada’s weed industry.

Speakers and panels covered the horizon, ranging from regulatory issues and public health concerns to branding, marketing, packaging and consumables. Some 300 participants included Canada’s three largest growers and an expert on the exploding market in consumables — edibles and other alternatives to smoking.

C-45 and C-46 are before the Senate Committee on Social Affairs, Science and Technology, last stop in the approval process that began last July. The committee’s vice-chair Sen. Pierre Hughes Boisvenu told a recent Conservative party gathering he doesn’t see recreational cannabis made legal until January, 2019.

C-45 gives Ottawa exclusive right to licence growers, processors, exporters and all aspects of branding, labelling and distribution. Medical and recreational pot will be delivered in similar packaging; advertising and promotion will be subject to tobacco rules. The fast-growing markets in edibles and alternative-delivery systems (nebulizers, etc.) will have to wait a year while the feds and provinces work through problems.

C-46 sets out testing procedures, impairment levels and penalties for drug-impaired driving. Canadian police forces will be required to equip their patrols with “spit kits” as well as roadside alcohol breathalyzers. The kits test for THC, cocaine, and methamphetamine. As with alcohol, those who fail roadside spit tests are subject to further testing, with one level for summary conviction and a higher level leading to a criminal conviction.

There was general agreement court challenges are a near-certainty, especially in Quebec where PL157 mandates a zero-tolerance level for THC, whereas the rest of Canada is proposing a 25-nanogram roadside test threshold to separate seriously impaired drivers from someone who might have consumed within in the past 24 hours.

Ottawa and the provinces generally agree on the need to control the black market by keeping the market price as low as possible. Under federal law, individuals would be allowed to grow up to four plants. However, Quebec and Manitoba have chosen to prohibit home cultivation altogether, despite the four-plant limit allowed under the proposed federal law. If their prohibition is challenged in court, Justice Minister Jody Wilson-Raybould has said the federal law will prevail.

The feds are giving the provinces wide latitude in deciding how recreational cannabis should be distributed. Quebec and Alberta propose to make 18 the legal consumption age; the other provinces are all 19. Five provinces, Quebec included, will control distribution and sale through their own retail networks.

Under PL 157, Quebec has created a distribution arm of the SAQ, the Société québécois du cannabis (SQC), to oversee the purchase of 62 tonnes of bulk weed annually from federally licenced growers. It will be sold in 20-150 stores, but as with all of Quebec’s initiatives under PL 157, timing is up to an oversight committee mandated to advise the government on every step of the legalization process.

Under the terms of a $5 billion contract announced this past week, Quebec’s sole licenced grower, Gatineau-based Hydropothecary will supply the SQC 200,000 kilos over five years. By then, Hydropothecary is hoping to have 63 products — cannabis and its derivatives in every delivery form — ready for the legal consumables market.

Gadgets and consumables were the big draw on the convention floor. Aurora was showing off Envoy, a self-contained miniature greenhouse. Hydropothecary showed off Elixir, a sublingual nebulizer delivering a minty THC/cannabidiol blend and Decarb, an edible THC/CBD capsule or mixable powder. Benefits are never spelled out; federal law prohibits unsubstantiated medical claims and the medical profession is generally wary of the hype surrounding cannabis’s real and/or imagined medical uses.

Marijuana contains more than 100 cannabinoids, but is grown for two principal ingredients — tetrahydrocannabinol, or THC, and cannabidiol, or CBD. THC is psychoactive — it gets you high by binding to certain receptors in the brain. CBD binds to different brain receptors and is medically available in Canada (Sativex) for the treatment of multiple sclerosis symptoms. Research is attempting to determine CBD’s efficacy in the treatment of other conditions ranging from multiple sclerosis to epilepsy.

Effects on Quebec cities and towns

Major concerns: One-law-fits-all edict, SQC big-footing local government on traffic, zoning, permit and derogation issues. Every municipality is different, with different policies based on what its citizens want.

$1.25/resident: Recurring enforcement and social costs that should be borne by Ottawa. Municipal/regional police forces will be saddled with costs of enforcing ban on unlicensed cultivation and public cannabis use. Municipal/provincial courts will bear cost of prosecuting offenders. Instead of grow-op ban, UMQ, Mtl. propose $250 four-plant licence.

Major concerns: Legalization will turn Canada into a huge social and medical experiment before the medical profession is set up to measure the effects on individuals and the healthcare system. Doctors reluctant to refer patients for clinical studies and trials, especially in Quebec where the College des medicins discourages its members from writing medical pot prescriptions. Ware: The problem isn’t in recruiting patients, it’s recruiting doctors to participate in a study.

Studies underway: Is CBD a medical magic bullet? Which markers determine whether someone will respond well to the molecule and who might be genetically predisposed to psychotic or allergic reactions to cannabis? Why do men and women respond to molecule differently? Canada needs to invest in research now, before the U.S. jumps in.

Reps for Canada’s Big Three commercial growers talked about the regulatory logistics and cultural challenges. Greenblatt, co-founder of Santé Cannabis, the first medical pot dispensary in Montreal, complained about the stifling regulatory atmosphere in Quebec. Hydropothecary’s Killeen was far more conciliatory, understandable in light of the SQC’s huge buy from his company later in the week.

Takeaway: They’re all happy to be pioneers in an emerging industry where publicly listed corporations are already trading at valuation levels untethered to real market value. Whatever happens, they’ll each make millions.

The market for consumables

— Sylvain Charlebois, Dean of of the Faculty of Management, Dalhousie University

Central message: The market for consumables will dwarf the demand for legal pot. Ottawa and the provinces have agreed to delay legalization of consumables for one year after the recreational use of cannabis is legalized. Health Canada’s central message: ingest, don’t smoke. 81% of Canadians are ready to try edibles. Charlebois predicts a $5 billion market, especially in Quebec where surveys show people demonstrate a more evolved understanding of edibles.

Charlebois, an acknowledged food marketing expert, noted that cannabis combines well with a wide variety of foodstuffs and can be processed into a wide range of products — butter, spices, oils and baked goods.

Quebec’s policy in response to the emerging consumables market is unclear. Quebec’s minister responsible for PL157 has expressed concern over the marketing of THC concentrates known by their street names — shatter, wax, honeycomb, dab, hash oil. While cannabis THC levels are below 30% because of the plant’s own inherent limitations, transformers can produce concentrates of up to 90% THC.

As the result of public hearings into C-45, Ottawa will now allow the licensing of microfarms (200 sq. metres). Microproducers will be required to sell output to licensed producers or transform their output (up to 600 kilos, representing the average output from 200 square metres) themselves.

Main point: Cannabis marketing is missing an huge target — women and minorities. This 49-year-old former Surrey, B.C. two-term city councillor was the only speaker to discuss why she uses cannabis — to enable her to sleep. Women aren’t interested in recreational use and place more importance on word-of-mouth than any other form of marketing. They favour edibles and other consumption alternatives over smoking and vaping.

Rasode noted the role of cannabis in traditional Chinese and ayurvedic (southeast Asian) medicine and the need to explain in those terms why Canada is proceeding with legalization. This market is more concerned with how and where the product was produced. They’re uncertain, confused and seeking a more evolved message.

Others I spoke with:

— An actuary for Intact Insurance. He has major concerns with the federal legislation and appreciates Quebec’s incremental approach. He echoed Montreal executive committee member Robert Beaudry, who noted during his panel that Montreal is Quebec’s largest employer and has to develop a policy covering marijuana in the workplace that doesn’t conflict with collective agreements.

Intact anticipates a conflict between impairment levels permitted in the Criminal Code and levels being proposed in Quebec’s Highway Code.

C-46, the federal legislation, proposes a roadside saliva test level of 25 nanograms for THC and 50 nanograms for cocaine or methamphetamine. Roadside test levels were set deliberately high to reduce the inevitable lawsuits. Once at the station, however, a 2-nano reading is sufficient for a summary conviction and 5 nanos a Criminal Code violation, with sanctions similar to those for blood alcohol levels in excess of .08.

Quebec’s proposed changes are far more draconian, with zero tolerance for drug impairment and an automatic 90-day licence suspension on the spot.

— James McMillan, Hydropothecary VP of business development. He said Hypothecary will be signing production agreements with micro producers to deliver the volume of cannabis the company anticipates requiring once consumables are legal. Any Quebec municipality with unused farmland would have an inside track at meeting the demand. He invited members of council to visit the company’s facility in Gatineau.