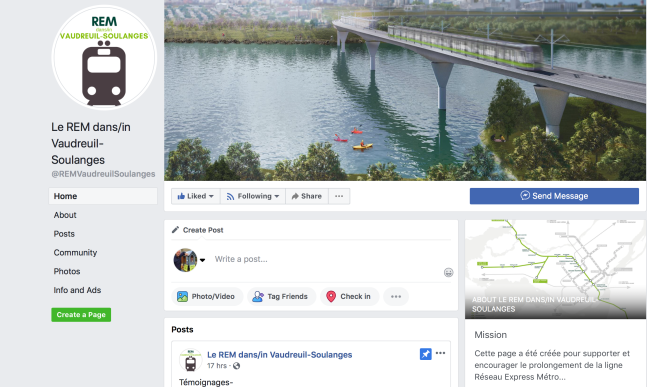 This Facebook page has been created to advocate for the extension of the Réseau express métropolitain (REM) line to Vaudreuil-Soulanges via the new Ile aux Tourtes bridge.

In December, the government announced that a replacement for the nearly 60-year-old Ile aux Tourtes bridge would be completed by 2030. Plans for the new bridge include dedicated bus lanes and separate corridors for cyclists and pedestrians — but no LRT corridor.

Unless regional public transit agencies are prepared to keep operating the existing Vaudreuil-Hudson commuter rail line once the REM is in service, Vaudreuil-Soulanges and its 150,000+ residents will lose their only mass public transit link to Montreal.

Without access to a high-speed mass public transit system:

– Vaudreuil-Soulanges enterprises, including the promised hospital, will struggle to attract labour. By its projected 2026 completion, the hospital will represent some 4,000 jobs;

– Vaudreuil-Soulanges residents will continue to be at the mercy of Montreal’s worsening traffic chaos and the eventuality of tolls;

– the Montreal Metropolitan Community will have missed the opportunity to significantly reduce greenhouse gas emissions in the fight against climate change, a keystone of the MMC’s master plan.