I don’t know about you, but I’m not getting a good feeling about last week’s Vaudreuil-Soulanges hospital announcement made by Premier Philippe Couillard, Health Minister Gaètan Barrette and our region’s two Liberal MNAs Lucie Charlebois and Marie-Claude Nichols. According to today’s Liberal 2018-19 budget, the hospital is ‘now in the “planning stage” in the 2018-2028 capital investment plan. Where was it prior to last Thursday’s announcement? What went on during those 10 years since former health minister Yves Bolduc made the initial promise?

Four months as a municipal councillor have taught me the tricks governments use to kick an election-promise can down the road. Posting them in a capital investment wish list is a sure-fire can-kicker.

Maybe I’m using the wrong metaphor. Instead of kicking the can, what about badminton with the bureaucracy? We’re the bird being whacked back and forth. 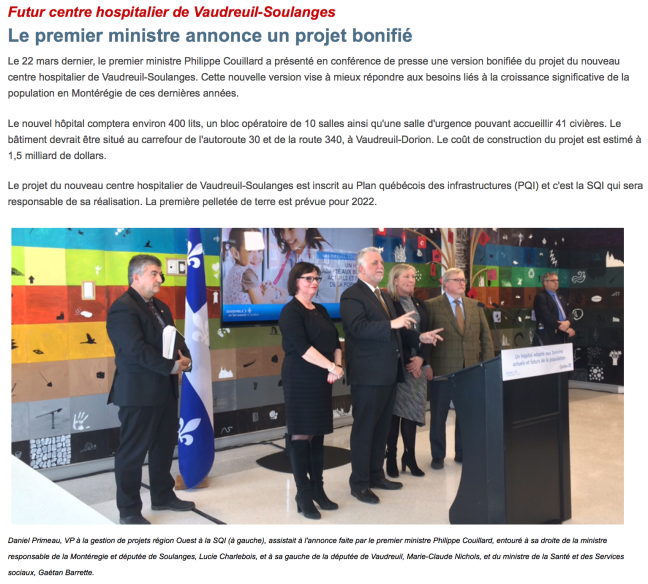 My last blog Political Improv was written following last Thursday’s announcement, described above on the website of the SQI, the government’s real estate development arm. Since then, I’ve come to reflect on why I concluded the event was improvised. It was the absence of documentation.

Whenever the provincial government has a significant announcement to make, there’s a snowstorm of releases beginning with the invite to a news conference. Journalists attending tare greeted with media kits. Usually there’s a page on the announcement and a page or two of briefing notes. If more than one elected official is present, one also gets copies of speeches to be checked against delivery.

These media kits are assembled by the press attachés for the porteur du dossier, the ministry or agency under whose authority the announcement is being made, with input from their colleagues in the political sphere. In this case, the media kit should have included a statement from Couillard’s office, an explainer from Barrette’s people and comments from both MNAs, one of whom is also a cabinet minister.

The invite came from Yves Masse, president-director-general of the Centre intégré de santé et de services social de la Montérégie-Ouest. I received mine on my town email March 20. It was headed Annonce importante concernant les soins et les services de santé offerts sur le territoire de Vaudreuil-Soulanges but gave no details about who would be making it. The lack of paper says to me Masse and his people have as much enthusiasm for building this hospital as Vaudreuil-Soulanges residents have for voting Liberal. Quebec’s health and social services bureaucracy doesn’t take kindly to being ordered to work at anything more than a snail’s pace; 2028 may be optimistic.

So here we are on budget day evening, attempting to parse what, exactly, the government has announced in regard to a Vaudreuil-Soulanges hospital. Above is what we THINK is the envelope for the purchase of the site on which the hospital will be built. Is it?

I’m one of those who feels Finance Minister Letaio and the Couillard Liberals have done an exemplary job of cleaning up Quebec’s finances and putting this province back on the road to prosperity. Ex-Quebeckers visiting from outside the province can’t believe the number of public and private construction projects in Quebec’s major cities. But for whatever reason, the Couillard Liberals have neglected the Montérégie-Ouest, the tail on the Montérégie donkey with its head in Longueuil.

It makes no sense to me that the Liberals would deliberately turn their backs on Vaudreuil-Soulanges, a district which contains two ridings that have consistently voted Liberal for decades. But the lack of efficient public transit, no replacement date for the crumbling Île aux Tourtes bridge and a list of other deferred promises speak for themselves.

The Liberals could pull off a win in October’s election, but it won’t be with weasel words and bureaucratic code for “let’s kick this sucker down the road for another 10 years and see if those rubes in Vaudreuil-Soulanges are as stupid as they seem.”

One thought on “That lied-to feeling again”