Skip to content
Last Saturday we headed down to Jack Layton Park to launch our kayaks for a front-row seat on HYC’s Labour Day Regatta. There was a lineup of boats at the launching ramp and the parking lot was filled with cars, trucks and trailers. We saw nobody from Hudson. I suspect the vast majority were out-of-towners taking advantage of free services subsidized by Hudson taxpayers. Why, we wondered, is the town not charging for parking like just about any other popular nature destination I can think of?

Same story at Sandy Beach. Out-of-towners and their dogs, breaking Hudson’s leash laws with impunity. Locals tell me they don’t go near the beach on weekends because of out-of-control dogs. How many times in the past four years have council meetings heard these and other complaints?

I’ve been told the SQ won’t get out of their cruisers because the beach is privately owned. If the town’s development deal with Hans Muhlegg doesn’t insist on converting the existing servitude agreement to an outright transfer of ownership, how will this change? 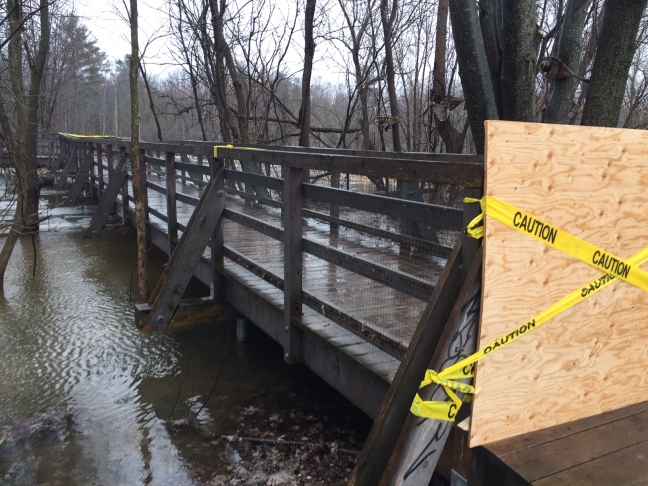 At least Jack Layton Park is being well maintained. The Sandy Beach Nature Trail isn’t. The bridge and boardwalk connecting the two remains closed. The observation deck on the lake is gone. Those ugly and expensive land art installations are disintegrating and carving chunks out of one of the majestic white pines. It’s depressing, seeing the neglect surrounding Hudson’s window on the water.

Benign neglect would be one thing. This is malevolent neglect. Hudson’s Parks, Recreation, Culture and Tourism directorate, under whose purview these facilities fall, has had budget increases every year since the Prévost administration took power. So why is one of Hudson’s most important greenspaces being allowed to fall apart like this?

It’s simple. Charge for parking, as they do at Cap St. Jacques and most popular parks. Decide whether Hudson residents should get special treatment. Mandate public security to ticket those who don’t pay.  Use the revenue to maintain the space and fix what’s broken. It may be lost on some, but the culture file includes our natural environment.

Update: Following tonight’s council meeting, department director Nicolas Pedneault told me work has begun on the bridge and boardwalk. The steel structure was bent by the force of the floodwaters and needs replacement. Parts of the deck and handrails also require replacement. The lakeside observation deck will be replaced once the bridge reopens.