It was a quiet New Year’s with little to upset the tranquility of the transition into 2016. Texas, with the coming into effect of its ridiculous open-carry firearms law, was disturbing, even in a nation grown blasé with gun-related bloodshed. The Dubai hotel fire has us thinking ‘another 9/11′ until it emerged that everyone had escaped and the blaze was accidental. Or so they say.
It didn’t take long to shatter that tranquility. On New Year’s Day the Saudis confirmed they had executed 48 by beheading or firing squad, including an outspoken Shiite cleric who had criticized the kingdom’s treatment of its Shiite minority. News of Sheikh Nimr al-Nimr’s execution triggered riots throughout the Shiite Arab world, including the trashing and burning of part of the Saudi embassy in Tehran, Iran’s capital.
Those who monitor these events say the fact the Saudis lumped Nimr in with hardened jihadists was a warning to domestic dissidents.
Arrested during the Arab Spring roundups in 2012, Nimr was charged with sedition and other crimes even though supporters insist he never called for armed insurrection. He was sentenced to death in October 2014.
The timing does nothing for Saudi Arabia’s efforts to quash comparisons between its literal application of Sharia law and ISIS, the Sunni extremists who have adopted the Wahhabist fundamentalism at the heart of the Saudi power structure. On Saturday, the following image was posted on the website of Iran’s supreme leader Ayatollah Ali Khamenei, depicting what appears to be an Islamic State fighter about to kill a hostage and a Saudi executioner with a sword, with the question “Any differences?” 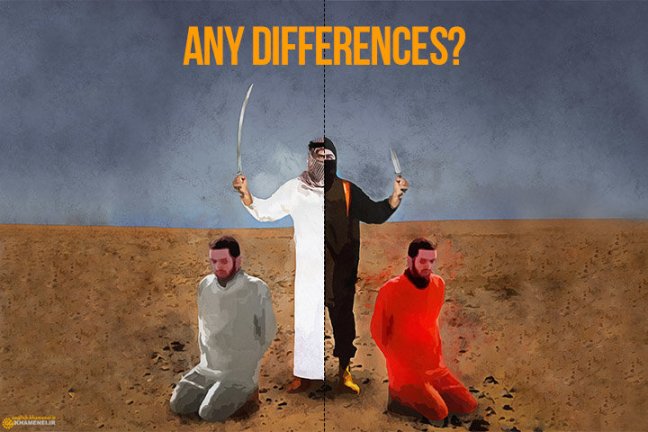 The Saudis say they’re working through a backlog of beheadees piled up during the final years of the reign of the late King Abdullah. At least 157 people were executed last year, which began with the inauguration of his successor King Salman. (Ninety people were put to death in 2014.) The last comparable mass execution was in 1980, when 63 jihadists were put to death after they seized the Grand Mosque in Mecca.
What is the Saudi game? My one-word theory: oil. Saudi Arabia, the world’s largest producer of crude, can’t afford to pump $30-a-barrel oil indefinitely; the Kingdom has just announced major hikes in domestic prices for gas, oil and petrochemicals to a citizenry unaccustomed to austerity. A step up in executions sends a powerful message to dissidents, while the threat of an all-out Middle Eastern war will do wonders for the price of crude. Nothing works better to distract the West from niggling human-rights issues, like the barbaric killing of so-called enemies of the state without due process.